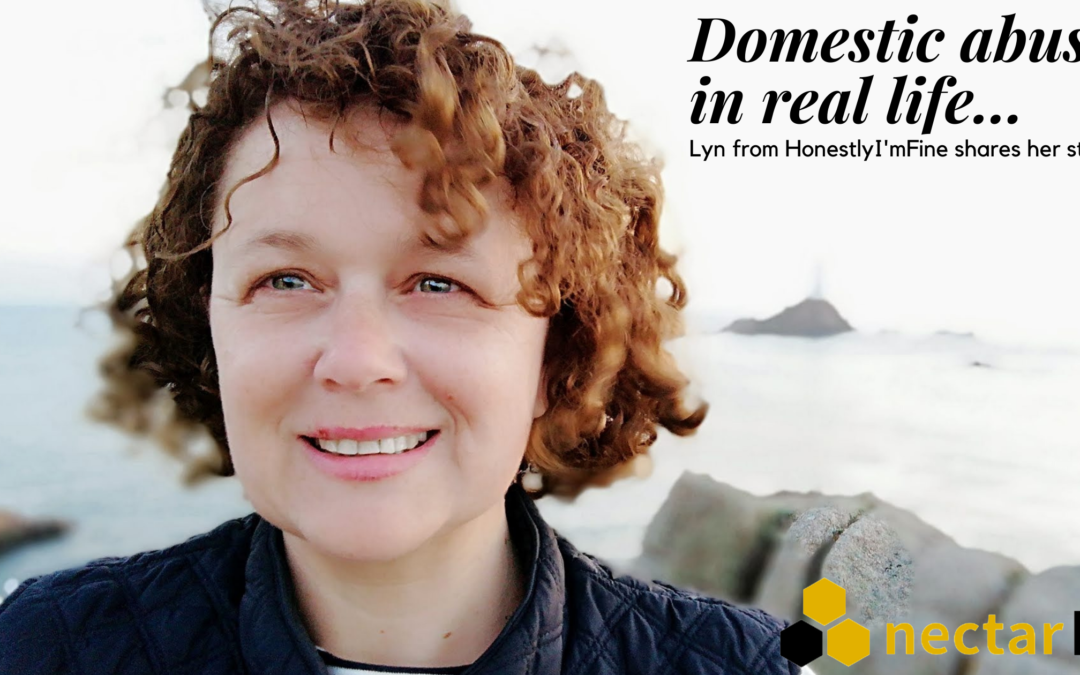 We are currently running a campaign on LinkedIn to raise awareness of domestic abuse in the workplace. As part of this, Lyn Whittle of Honestly, I’m Fine! reached out as a survivor of domestic abuse and shared her story with us.

I was 17 the first time I saw my mum with physical effects of domestic abuse. She was collecting me from the airport after I’d been on a month-long trip to Australia.

I asked her what happened and she told me she had been robbed. It was over a year later before she told us the truth.

My mum’s abuser was her boyfriend of 18 months. Slowly, over the previous six months, he had moved himself into our home.

At first it was not obvious that he was abusing my mum. We would hear them arguing at night, and later we found out he was actually beating her up at the same time.

Kicks in the stomach, punches to the head – all places where the evidence would not show. And always after he had a few too many to drink. Alcohol turned him nasty.

This went on for many months without us knowing. I also didn’t know it at the time, but I was the cause of a number of their fights. He would punch, kick and cream at my mum if I left my shoes or college bag in the wrong place. He couldn’t take it out on me and instead she took the abuse.

It was New Year’s Eve, eight months after my return from Australia. My mum and her boyfriend had gone out to the pub and I was at home looking after my brother and sister, 14 and 10 at the time. Mum came home early – around 11pm – got us out of bed and told us to bring our duvets – we had to leave the house, now.

We all bundled into the car and she drove us five miles away, where we slept in the car all night. Mum told me he had threated to kill us and she was so scared, but this is all she knew to do.

The next morning we went home with one of my Mum’s brothers. There was no sign of Mum’s boyfriend. My uncle changed the locks on the door so he couldn’t get back in.

I pleaded with my Mum to not see him again. She told me not to worry, that she was sorting it out. He never came back to the house to live with us, but my Mum allowed him to visit on a Saturday, when I was at work. I remember being so angry with her when I found out because she was putting herself at risk again.

To start with he was on his best behaviour, but then the punching and kicking started again. And again. And because she would only allow him in the house when I was not there, I became the issue of his behaviour towards my Mum again.

Then one day when she wouldn’t open the door to him, he kicked it in. My brother told me that they had had a massive fight – about me – and he had started kicking her.

I pleaded with her to call the police, but she wouldn’t. Instead she had a steel door installed.

This happened a month later. We had not heard from him and thought he had finally gone. But then we were all woken by screaming outside and kicking of the door. It was him.

It took 30 seconds for him to kick the front door open. My Mum screamed at him to get out. He grabbed her by her throat and dragged her by her hair into the toilet, where he beat her.

I tried to keep my sister away. My brother tried to pull him off her and he started on him too. He then turned back to my Mum, who was covered in blood in the corner of the toilet sobbing and trying to cover her face.

We all thought he was going to kill her.

I remember trying to find the phone to call the police. Then they were there, standing on our door step. But my Mum’s boyfriend came out and told the police that it was just a domestic issue and to leave.

They were about to turn around when I screamed at them to stop. That he is killing her. They arrested him.

My mum split us all up and we went to stay with friends. We were apart for six months. This was the start, for me, of putting barriers up. I didn’t allow anyone to get close to me, because then I couldn’t get hurt.

Support for survivors in the workplace

Without my knowing, my Mum approached my workplace – a Saturday job – and explained what was going on. She told our story – that I was a survivor of domestic abuse, and she asked if they would look out for her ex-boyfriend.

They arranged for me to get a taxi home at the end of the night and they never left me alone, I was also teamed up with others, so I had support.

He never approached me or my workplace, but if he had done, they were ready to take action.

When I found out I was so touched that they had done this for me, and looked out for me in this way. It showed me that there can be good in the world. I just wish I had know at the time, and because they told me many years later, it didn’t stop how I felt about men. I had very little trust in males, I always felt on edge and do even to this day. If I ever feel trapped I hate it, I always have to have an escape route

The domestic abuse was the start of my anxiety disorder. It took me many years to trust anyone and to open up to my family and allow them in my life more than just on birthdays and at Christmas. It felt easy to shut them off, because then I would not get hurt.

No one, not one person – professional or otherwise – ever asked me or my siblings if we were okay.

How it has shaped her profession

My business now is teaching managers how to spot the signs of poor mental health in the workplace.

Because we can do so much more to help others if we know how to recognise that they are struggling. If someone had asked me how I was really feeling, I may have gotten professional help at a younger age and not spent my twenties too scared to go anywhere near men, because I believed they were all evil. And not wanting to be close to my family, because then I wouldn’t get hurt if something happened that I was not able to control.

I felt guilty for so many years – that a lot of his attacks were because of things I did. I held this with me for so long, and it was only through counselling did I come to understand that it was just an excuse, I was a survivor. He would have found another reason to beat my Mum and to not see it as my fault if necessary.

The team at Nectar HR are incredibly grateful to Lyn for bravely sharing her story as a survivor of domestic abuse. Lyn’s experience profoundly highlights that children are vulnerable victims of domestic abuse, too. And that sadly, the impact of a child’s experience stays with them for life.

Follow us on LinkedIn for lots of great tips and information, and get in touch with us if you want your business to be a better source of support for victims.